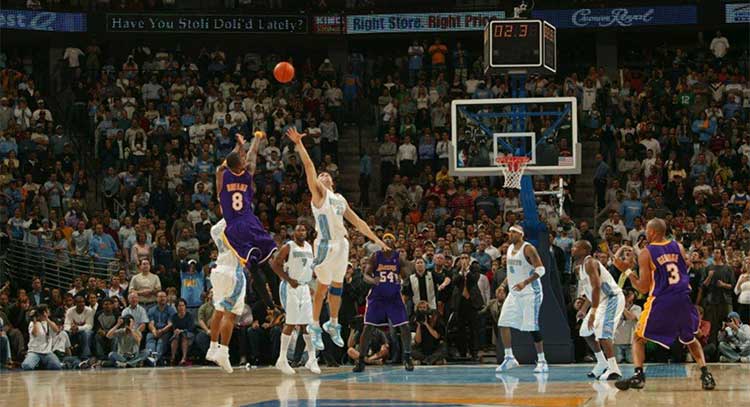 The buzzer beater is the last minute, or better yet, the last second, shot that takes a team to the win. It is an exciting, exhilarating, fan favorite that causes the crowd to leave their seats cheering. It is the last play that causes the coaches of the opposite team to hang their heads in defeat.

Not every NBA player can pull of a buzzer beater. There have only been 772 recorded buzzer beater shots in the history of NBA.

What Defines a Shot as a Buzzer Beater?

To be considered a buzzer beater the shot had to meet the following criteria.

Players who have beat the buzzer four times each.

Braun’s most memorable buzzer beater occurred after he caught an in-bound pass sent by Ernie Vandeweghe. Braun then launched a 35-foot shot for the win against the St. Louis Bombers.

Braun has the distinguished reputation as being the first NBA player to have multiple buzzer beater shots. In 1950 he had 2, then in 1953 and 1954 he landed 2 more.

Hagan was a forward for the Hawks in 1956 to 1955. He achieved his first beater in his rookie season. This shot was also the first beater to be thrown during a play-off game.

West was a guard for the Lakers in 1960 to 1974. West not only has four buzzer beaters to his credit he has multiple beaters that occurred during play-off games. To top that he created the opportunities to make those buzzer beating shots by stealing the ball.

Ballard played as a forward for the Bullets, Warriors, and the Super Sonics, from 1977 until 1989. Ballard is a surprise in this category. He was never an All-star player, and he was never a Hall of Fame player, but, between 1980 and 1985 he pulled off four winning buzzer shots.

All four of his buzzer beater shots occurred from a distance of at least twenty feet. Two of his shots were 3 pointers, and he holds the record as being the first player to do that.

Larry also won two consecutive games by throwing buzzer beaters. In 1985 on January 27 and again on January 29, he made legendary shots for the win, just getting his points in before the buzzer ended the games.

Laimbeer played from 1980 to 1994 for the Cavaliers and the Pistons. He was a center, and his four buzzer beaters made him the first center to reach that achievement. All four of his game winning shots were taken from no less than ten feet away.

Michael Jordan is the buzzer beater king with a total of nine. His shots were taken anywhere from 14 feet to 26 feet away.

Seven of his “buzzer beating” shots were made unassisted. Six of those game winning throws occurred during regular season games. Three of his beaters were made during playoff games, and two of those fantastic plays ended the series.

Jordan retired at the end of the season in 1993. At that time, he had four buzzer beaters accredited to his name. He came out of retirements and five years later he had a record of making twice as many of these game ending shots as any other NBA player. He retired again, and then when he retired the last time at the end of 2003, he had a spectacular list of nine buzzer beaters. At that time no other player had a record of making more than four of these spectacular shots.

Kobe Bryant has the leading number of buzzer beaters for a win when his team was behind. He shot 6 of those game changing shots in his career.

Vince Carter came in with five times that he made game changing buzzer beater shots for his team.

Larry Bird and Michael Jordan have both saved their teams on four occasions by throwing buzzer beaters when the team was behind.

Kobe Bryant has made seven regular season buzzer beaters. He is tied with Joe Johnson for the most ever buzzer beaters during regular games.

When it comes to post-season play-off buzzer beaters there is only one who can claim 5 of those game winning shots.

LeBron James made a 19-foot shot on January 23, 2009, and then a 25 foot shot against Magic Johnson. He is the leading champ in post season grand shots.

The buzzer beaters are exciting to see and they give the crowd an unexpected surprise. When a player has seconds on the clock and takes the ball into the basket for a win it is something to cheer about and something to remember.

We also have to remember that no player wins a game by themselves. It takes all of the team working together to create a win.