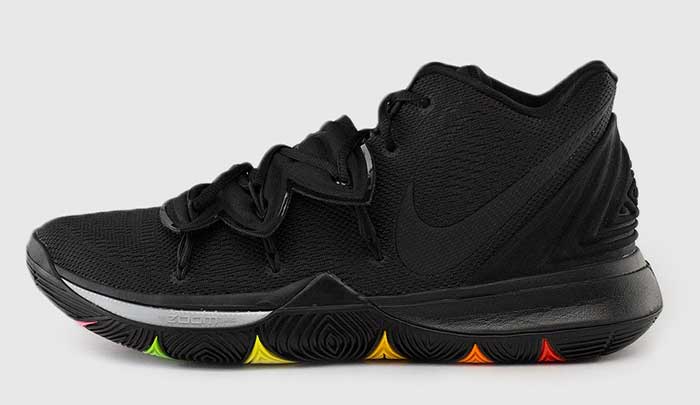 Kyrie Irving is an American NBA star. He was drafted in the first round of the 2011 draft out of Duke, and has played for the Cleveland Cavaliers, Boston Celtics, and plays for the Brooklyn Nets. Irving partners with Nike to bring basketball players of all ages and playing ability his most stylish shoes yet. The Kyrie 5s offer new technology to the players for added comfort and support that the wearer will love.

Venus Flytrap inspired containment system which holds the players foot securely in place, giving a comfortably snug feel and solid foot lockdown which means the player can move more freely without worrying about slippage. This optimizes the responsiveness in the foot for the players.

This shoe features an updated cushioning system called the Nike Air Zoom Turbo. This follows the form of the players foot which allows for more responsiveness to the way a player’s foot rolls when he walks or runs down the court. This foam midsole also adds a good level of comfort to the shoe.

The traction on the bottom of this shoe is inspired by Hamsa’s all-seeing eye which followers of Kyrie know is tattoo’d to his left arm. This gives the outsole a different geometric pattern which ensures stability and flexibility for the players. The sole also comes up the sides of the shoe to provide rolling traction for any pivot or quick change needs.

The Kyrie 5 is made with a mesh upper that allows for the shoe to breathe and combined with the Flytrap containment system provides comfort yet support to the wearer.

The padded ankle collar provides support to the player’s Achilles tendon, to give the ankles the much needed support.

The Kyrie 5s come in over fifteen different color patterns including:

– ‘Blue Devils’ PE which comes in three versions that all have a combination of black, blue, and white as an ode to his college days

– ‘Celtics’ PE celebrates his days on the Celtics with a green, retro vibe; ‘Friends’ is a shout out to the beloved TV show with teal, yellow, and orange highlights;

– ‘Galaxy’ is a space theme with navy blue, metallic silver, purples, and pinks; ‘Have a Nike Day’; ‘Ikhet’; ‘Just Do It’; ‘Mamba Mentality’ is inspired by Kobe and the Joker.

Many users reported that this shoe has a lot of court feel. This is great for those players who love to feel the court under their feet. This can give them a better sense of awareness and grounded feeling while they are traveling down the court, which is a huge plus for some players. However, those who are looking for the comfort of extra cushion will not find it with these shoes.

Lots of reviewers said that this shoe was durable. Some even reported their teenage boys using them for over a year as a daily use shoe. This durability for both the outsole and the overall design is impressive in a shoe is as light and responsive as this one.

One of the biggest pros that people love about this shoe is the fact that it was built for quick cuts and traction. Basketball is a quick game with lots of momentum shifts and quick pivots. This can be dangerous, but with this shoe’s design, it provides support for these quick cuts and traction that makes the player feel comfortable and have faith in his shoe.

Basketball players who wear this shoe have reported the great ankle support they feel from it. The cushioned ankle collar provides support for the Achilles tendon which many notice. Also, the high top design and enhanced traction allow for greater mobility.

Much like the way this shoe is built for quick cuts and traction, it also protects the ankle in extreme, lateral moves which is important to basketball players. Basketball players know how easy it is to roll an ankle when you are trying to move quickly, but the support this shoe brings to the ankle is the next level and gives players a lot of peace of mind.

Another big plus of this shoe design is the Flytrap Technology. This revolutionary lace design is inspired the Venus Flytrap rapidly closes on its prey and holds it in tightly. This Flytrap technology adds an extra layer of support and holds the foot in place while distributing out the compression so no part of the foot gets pinched or sore.

Takes Time to Break In

Many users of the shoe report that the traction takes time to break it. It takes many times out on the court or around town before the slipperiness of the outsole wears off and they get the best grip of the shoe to the court. Once this period is over, the traction is good, but it is frustrating to wearers at first.

There is a lot of court feel to this shoe. This is great for those who love it, but definitely not great for those who need a little extra support and cushion. Without the cushion, players’ feet are more prone to get sore and tired more easily and playing time can go down. Many reviewers complained about the lack of padding in the shoe. This shoe’s technology provides support but lacks the comfort of a little extra padding that many players want.

Many found the Flytrap Lacing to be very complicated to use. Although it does what it is designed to do, and holds the foot securely in place, the lacing is complicated and takes extra time to put on and take off which many found to be annoying.

Runs Half a Size Smaller Than Other Nikes