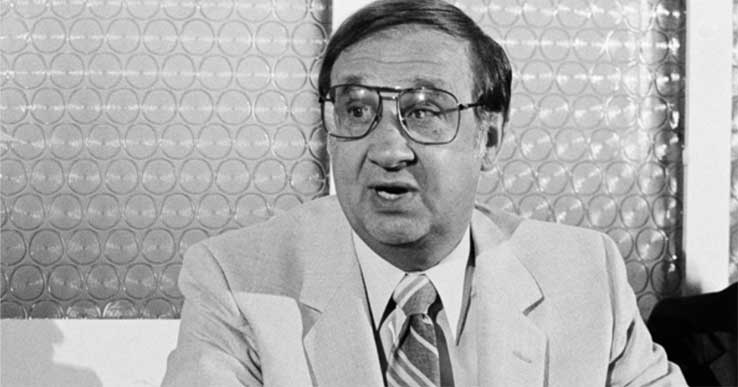 The 1980s and 90s are considered some of the best years in the NBA. With a slew of some of the greatest players to grace the hardwood like Michael Jordan, Isaiah Thomas, Magic Johnson, Kareem Abdul Jabbar, and Larry Bird, intensity and aggressiveness were the order of the day.

Players were hard at work trying to outdo each other, and fans had their money’s worth. But this was only the case if you were not a Cleveland Cavaliers fan.

While the fortunes of other teams were starting to turn around, the Cavaliers were knee-deep in trouble. The fans, players, and even the league were disgusted with the team, and all this was because of one person – Owner Ted Stepien.

Who Was Ted Stepien?

Ted Stepien was an American Businessman who, in his youth, set up the National Advertising Service. Over the years, the company grew into a multi-million empire, and in extension, Stepien gained multi-million status.

With his newly found wealth, Stepien was looking to invest and the opportunity to purchase the Cleveland Cavaliers came along. He spent $2 million purchasing a 38% stake in the summer of 1980. By the end of the same year, Ted Stepien had increased his stake with the Cavs to 82%, which gave him control of day-to-day operations.

In a short 3-season stint, Ted Stepien became known as the undisputed worst NBA team-owner. His reign started with the firing of Cavs head coach Stan Albeck and four others in quick succession who included Bill Musselman, and Chuck Daly.

During his tenure, he also fired popular commentators, threatened to move the team, and made several racial comments against black players who were the majority in the game.

All these actions couldn’t amount to the damage Stepien caused by his self-proclaimed “eye for talent.” He made bad trade after bad trade so much that the NBA had to step in to prevent further squandering of the team’s assets in the form of first-round picks, which would have seen the team disband due to instability.

In 1981, the NBA stepped in and prevented Stepien from trading any team’s first-round picks without its approval. This was then followed by the now-famous ‘Stepien Rule, ‘ which is in effect today.

What is the Stepien Rule?

After suspending the Cavs ability to trade first-round picks in 1981 without its approval, the NBA came back with a lasting solution in 1983 in the form of the Stepien Rule which states:

The most astonishing thing about Ted Stepien’s trading spree is how bad the trades were. More so, considering the quality of players the Cavaliers would have drafted had Stepien not squandered the first-round draft picks.

While there are numerous bad trades in the NBA, Ted Stepien must be the headliner for bad trades in not only the NBA but the entire sporting industry.

The Worst Trades by Ted Stepien in NBA History and Why

The trades and gambles Stepien made are a clear indication of his arrogance and belief that he was a “mastermind” dealer.

In his first trade, Stepien traded the Cavs’ first-round pick (#1 Overall) to the Lakers and, in turn, got Don Ford a forward who averaged 6.4 points 3.6 rebounds and 1.4 assists. The Lakers ended up drafting James Worthy, who played a hooping 926 regular-season games in the NBA, averaging 17.6 points, 5.1 rebounds, and 3 assists in the regular season.

Worthy was a more formidable opponent in the playoffs, putting up sizzling numbers at 21.1 points and 5.2 rebounds. Today, James Worthy is part of the Naismith Hall of Fame and one of the greatest players to ever play the game.

Don Ford fell short in terms of performance and in longevity, having played slightly over 100 games in the NBA. But what makes this one of the worst trades is because Cleveland had struggled through the year, and they had an excellent chance of landing a top-five pick. Instead, the owner decided to trade for a subpar player in the name of “an eye for talent”.

The second trade wasn’t any better. The Cavaliers once more traded a first-round pick (#4 overall), which would have landed Forward, Sam Perkins, but got point guard Mike Bratz.

Again, Cleveland found a way to trade a durable, productive player for a less durable player with below-average performance.

The most painful part about the trade was that Bratz was actually a backup that was averaging just 16 minutes of play, which is nowhere near the first-round pick value.

The third trade didn’t include first-round picks, but it wasn’t any less messy. The Cavs traded Campy Russell, a small forward who became a one-time All-Star averaging 16 points and 5 rebounds and got Bill Robizine.

Even though Robizine had better numbers and put up an average of 17 points and 10 rebounds, the Cavs blew the trade by trading Robizine after only 8 games with the team.

The fourth trade is perhaps the most troubling. In a nutshell, the Cavs were trading two 1st round picks and an All-Star for a back-up who put up a paltry 10 points and 7 rebounds.

In this trade, the Cavs gave up the 1983 1st round pick (11 overall) for Richard Washington. They also traded the 1986 1st round pick (7th overall) and got Jerome Whitehead and finally traded Bill Robizine in the same season.

The Cavaliers waived Jerome Whitehead after playing just 3 games, which means Richard Washington was all the team had to show after spending so many assets and a good player in Robizine.

It’s even more painful considering that Washington was a career backup averaging 9points and 5 rebounds per game with the Cavs.

Life after the NBA for Ted Stepien

After three short but unruly seasons, Stepien decided to sell the Cavaliers to George and Gordon Gund for $20 million. The NBA stepped in to sweeten the deal by giving the Gund brothers a few extra picks to help them re-build the team.

Using his pay, Stepien founded the Toronto Tornados in the Continental Basketball Association (CBA) and had another team in the Global Basketball Association. While he had changed ownership, he was still not short of controversy. In 1987, he was fined $50,000 by the CBA for failing to corporate with league investigation for salary cap violations, which he was notorious for even in his days in the NBA.

In 2003, he tried his luck as sporting once more by founding the United Pro Basketball League, which had four teams. He also opened several dining rooms called “Competitors Clubs” in Cleveland.

His run in the sports industry would come to an end in 2007, when the most controversial and worst owner in NBA history thus far suffered a heart attack and died.