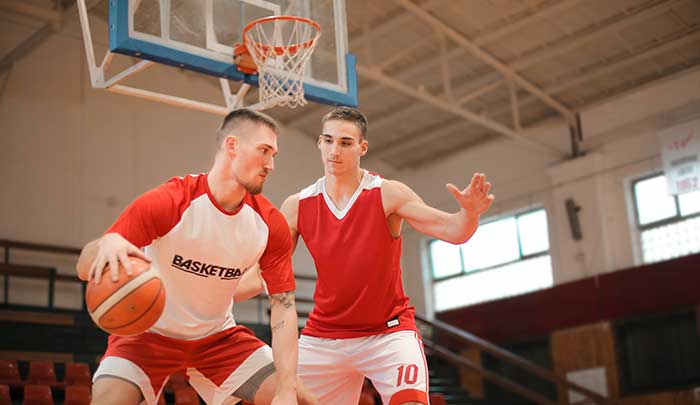 In basketball, a turnover means a team losing the ball to their opponents, in other words, a wasted opportunity as this rarely happens by accident. This tends to happen because of bad strategy, unsatisfactory teamwork or fouls committed by the team.

Definition of a basketball turnover from jr.nba.com:

“A player is charged with a turnover if they lose possession of the ball to the opposing team before a shot is attempted.”

What Causes a Turnover?

There are obvious basketball rules and among them, a turnover means the team is guilty of committing a foul. A turnover occurs when a ball is stolen from the opponent or when a player makes a double dribble.

Other instances include stepping out of bounds, throwing the ball out of bounds, making the three-second or five-second violation, a shot-clock violation, backcourt violation and traveling. There are offensive fouls and technical fouls in basketball which all players should follow, if not they might get a turnover when these mistakes happen.

Forced Turnovers: a defender steals the ball or gives a bad pass, traps a player and forces them to make a poor decision, etc. Simply put – turnovers caused by the opponent is solid defense.

These are some of the violations that cause turnovers –

How to Avoid a Turnover

Turnovers are never accidental and they tend to happen when team members aren’t playing hand in hand. They’re caused by lack of practice, not having proper gameplay and not reviewing previous game tapes. Additionally, it’s important to maintain a good relationship with and listen to the coach.

After an unsuccessful game, the first step is to sit down and review the game with your team. Spotting the moment the error started can help understand why things went wrong. If your team doesn’t identify and resolve what caused the turnover, chances are it will happen again.

Another reason for turnover is not knowing the opponents’ moves before the game. Watch your opponents’ previous matches to understand their power moves and work out their weaknesses. This will give you a better understanding of how they work as a team and predict their moves.

Turnovers also happen because players are nervous or excited. When in possession of the ball, their first instinct might be to shoot the hoop, which might not be the best idea at that point. During practice, a player won’t face unexpected events, but when these occur during a game, nerves or confusion may get the better of them.

The best way to experience real games is by practicing in fast-paced situations. It’s also important to place ‘opponents’ during a game, where the player can perform tasks like defending the ball, catching the ball in a jump stop or to look for opportunities to make a pass with their fellow team members. With proper and regular practice, the art of defending the ball even in the worst situations will work.

Solid communication among the team is essential, because once on the court, there won’t be time to tell or explain what to do or more importantly, what not to do. It’s important to build a strong relationship where you understand what the other team member is about to do and prepare for the next move. Understanding the opponent and acting accordingly will bring the team together, making the team perform better.

Turnover Stats – Can They Help?

Statics demonstrates a connection between turnovers in youth basketball, wins & losses. The team that turns over the ball fewer times in the game stands a better chance of winning.

Following statistics will enable you to spot the player making the majority of turnovers. Discussion among the team to fix the issues is the best cause of action, don’t hide them, hiding will not fix the problem or make your game better. Now – don’t go shouting about how many turnovers someone made, but do tell them to begin working on it.

The bottom line is turnovers will happen, but by learning and applying this in practice, your game will improve and so too, your chances of victory. Remember, turnovers aren’t accidental, they’re self-made. The trick is to keep a steady and calm mind throughout the game.

Practice will only improve your game. Understanding your opponents will also play a huge part in avoiding turnovers.