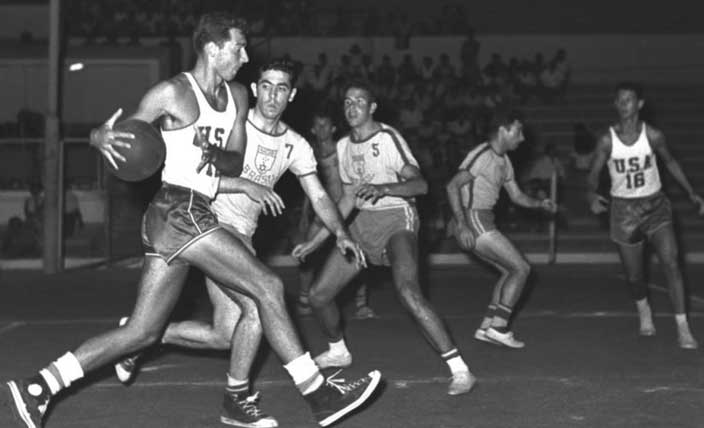 At least 213 nations across the world are members of FIBA and have their own national leagues. However, NBA, the national basketball league in the USA, is recognized by many people as the best basketball league in the world. The game is generally considered a high-intensity contact sport that involves 6 players per side. 4 quarters are played per game and the team with the highest number of points wins. Points are scored if a player from either side is able to put the ball in the rim located on either end of the basketball court.

The very first match of basketball

The first match of any sport is the most exciting and unforgettable day of the history of that sport. If we go through the history, the first match of basketball was taken place on 21st December 1891 in the Armory street court: 9 versus 9 under the instruction of Dr. James Naismith and the equipment were a soccer ball and two peach baskets only no Spalding ball or metal hoop. Dr. James Naismith had 18 students in his physical education class so he decided to divide them into two teams.

Why it is called “Basketball”

As Dr. James Naismith wash was the inventor many people suggested to give the of the game after his name but he refused and said that “we have a ball and a basket so why don’t we call it Basketball?” that’s how the name Basketball of this game form.

History of Ball of Basketball

In history the very first company of producing basketball for official use was the brand Spalding in 19th century. Before 1983 the sport was playing with soccer ball (including first match) Nowadays the standard size of a basketball (according to NBA) is 29.5 inches.

Though Dr. James Naismith invented basketball he did not fixed any specific size. The YMCA gym court limited the first match. So the court size is changing with its evolvement.

Dr. James Naismith had introduced only 13 rules as guideline of playing the game and they were;

Role of YMCA in introducing Basketball

YMCA played a significant role to introduce Basketball in front of the whole world by arranging the first European basketball match in Paris in 1893. After the matching basketball developed rapidly. In basketball history, the first international match took place in Saint Petersburg in 1909.

As basketball was spreading its name the first international organization FIBA (Fédération Internationale de basketball amateur) in Geneva established as a result basketball first time participated in the Olympic Games as a sport in 1936 and the match was played on a sludge court. U.S. national team won the first Olympic title and the runner-up team was from Canada.

Being an international sport, it is comprising its roots but developing day by day. This can be the main reason for its rapid growth of advancement and all thanks go to Dr. James Naismith for gifting the world a ravishing sport like Basketball.

When was basketball invented?

In Springfeild, Massachusetts in 1891 Dr. James Naismith was asked to invent a new indoor game that young athletes could play for physical activity. That new game was the game of basketball. A peach basket had the bottom cut out of it and that was what was used for a hoop.

Where did the game of basketball originate?

Basketabll originated in the United States at the Springfeild College. The game was created by Dr. James Naismith at the request of the college, and since that day has steadily grown in popularity throughout the country and the world.

Who predominantly played basketball across the timeline?

Yao Ming is one of the only Chinese players who have played in the NBA although there are reportedly 300 million people in China that play basketball as a recreational experience. Yao Ming was one of their only professional players who could compete against American players with equal skill and finesse.

What are the 13 original rules of basketball?

6) striking the ball with a fist is a foul

8) A goal is completed when a ball is thrown or batted into the basket,

11) The referee judg3es when the ball is played in bounds, which team has the ball, and shall keep the time

13) The team that scores the most goal is the winner