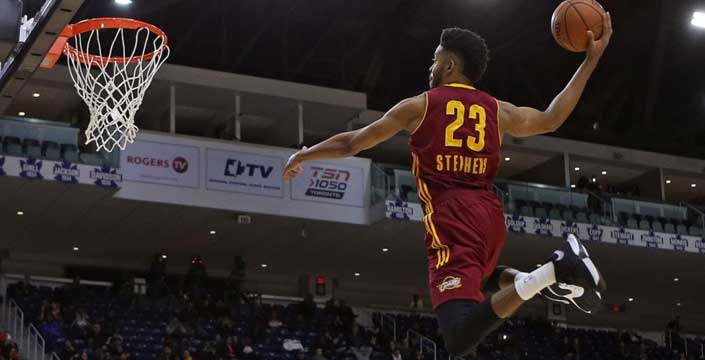 The only thing more exhilarating than watching a player perform a slam dunk during a basketball game is to be the player making the slam dunk.

A basketball goal is ten foot from ground to goal. So how tall do you have to be in order to make slam dunks during a game?

The hoop is 10′ above the ground, but to make a slam dunk a player must get their hands another six inches into the air so that they are positioned above the rim of the goal. The average player that stands 6′ tall is able to extend their arms and reach 8 feet. That means a six-foot-tall player has to be able to jump 30 inches vertically in order to get their hands six inches above the rim.

That does not mean that you have to be six feet tall, or taller to make a slam dunk. Muggsy Bogues was one of the shortest basketball players to ever play. He stood only 5’3” and weighed only 134 pounds. Mugsy never performed a slam dunk during a game when fans were watching. However, Mugsy did perform slam dunks during practices, and there are witnesses that can attest to that. So technically a person that is 5’3” can dunk the ball.

The average basketball player today is taller than 6 foot. Many of the players are 7 foot or more in height. People who are shorter than that feel like they cannot do a dunk but practice and vertical jump strengthening exercises can help you to get above the rim.

Jump training takes work so you need to have an attitude that you will succeed. You will need to be diligent and practice frequently and on a regular basis. That means you have to set aside a certain amount of time each week to do your jump training exercise.

To start with you need to stand close to a wall. Extend your arm above your head and jump straight up. You need to have a friend mark the wall where the tips of your fingers touch when you do this. This will tell you how far up you can jump when you first begin. Leave the mark on the wall because you will use it later to compare your jump ability.

When you perform a vertical jump, you use your:

Never try to perform a vertical jump without athletic shoes. You must support your feet so you do not injure yourself when you land. The right fitting pair of athletic shoes will also naturally increase the height you can achieve during a jump.

When you try to make a vertical jump never allow your feet to be positioned wider than your hips are. If they are too far apart the power from your legs will go down and not up. The following jump exercises will help you to perform a slam dunk in no time.

During a depth jump you jump from the floor onto a box that is between ten and thirty inches tall. Start with the lower box and as your abilities improve gradually extend the box height.

Jump onto the box and then step off of the box. As soon as both of your feet are touching the floor jump straight up and see how much height you can get. Repeat the process.

You can use a series of boxes to help you increase your jump height. Use a shorter box as the first box. Step onto that box instead of jumping.

Then set up a second box so that when you step off of the first box you can immediately jump and land on the next box. The second box should b taller than the first one was.

You can follow the second box with third, but you should practice using just two boxes until you are proficient at landing on top of the second box. Your jump should be second nature, not something you have to think about. To make a jump second nature you have to do it repeatedly until your muscles can do it without a conscience effort.

You want to practice the running jump after you master the depth jump. A running jump will have you in motion towards the goal and when you reach the perfect position to the side of the goal you should jump vertically as high as you can.

Once you master the running jump you need to master running while you dribble, and handling the ball while you jump. Each of these skills will require practice, and each skill will feed off of the other skills you have developed.

Remember to periodically go back to your mark on the wall and repeat your initial vertical jump. This is a hope building exercise. You may not even realize how much higher you are jumping until you measure your jump against the mark on the wall.

You do not have to be really tall to make a slam dunk. Average guys who measure 5’6 and up do them all the time.