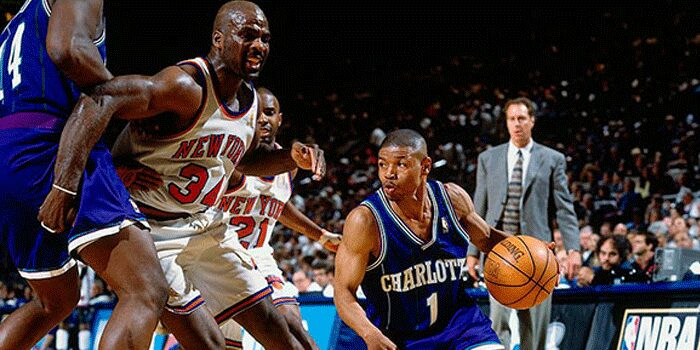 Muggsy Bogues will forever be known for being one of the shorter NBA players. A lot of people think that his height would have impeded his performance.

In order to dunk or slam dunk, a basketball player must jump high enough that they can put the ball into the hoop without bouncing the ball off of the backboard, or the rim. The player can use one or both hands during this action.

The regulation height for a basketball rim is 10 foot. The dunk, or slam dunk is easily performed by some of the taller player. Many of the basketball players stand more than 6’5” tall, so it is not a far stretch for them to jump up and dunk the ball.

It is often surprising to people when a shorter player is capable of making a slam dunk. This ability usually occurs because of the way the muscles of their calves twitch. When the muscles of the calf and thigh contract in rapid succession the player is provided with the abiulity to jump higher than average players can.

A lot of people say that Muggsy could not dunk the basketball, simply because they did not ever see him doing this during an NBA game. There were witnesses to his dunking ability in his high school games, and there are witnesses who saw him perform this action during a pregame, but recorded images of him doing a slam dunk do not exist.

In order to assess whether Muggsy Bogues could dunk the ball, or not, let’s look at some Muggsy facts.

Who Was Muggsy Bogues?

Muggsy Bogues was born Tyrone Bogues on January 9th of 1965 in Baltimore, Maryland. His parents Richard and Elaine, raised 3 sons, and 1 daughter in the Layfayette Public housing projects on the east side of the city.

Tyrone was not tall as a child; but his height never stopped him from being a force to be reckoned with on the basketball court. He regularly played ball with friends like Reggie Williams and David Wingate.

The boys practiced ball using a plastic milk crate that was missing the bottom, and attaching the milk crate to a fence. The boys may not have had every financial opportunity, but they did not let that challenge stop them from becoming NBA stars.

Young Muggsy met Coach Leon Howard, who saw the talent the boy possessed, and guided him towards a future in basketball. Muggsy was transferred from Southern High School in Baltimore to Dunbar. At Dunbar there was a better basketball program in place, and young Muggsy shined when he was on the court.

His high school team was named one of the top high school basketball teams in the years Muggsy played. His college team retired his jersey and number when he graduated.

How Tall was Muggsy?

It is reported that Tyrone Bogues, commonly known as “Muggsy” stood 5’3” tall. He weighed about 136 pounds.He was light on his feet, he could jump very high, and he was fast.He got the nickname “muggsy” from other players. They reportedly said his style of basketball was reminiscent of a mugging.

Muggsy Heads to the NBA

He was the 12th pick in the 1st round of the 1987 NBA draft. He was drafted by the Washington Bullets.

The next year, 1988, the Charlotte Hornets drafted him during an expansion draft. He remains an ambassador for the Hornets, and he is their special projects advisor.

In August of 2001 he was traded to the Dallas Mavericks.When he retired he was rated number 16 of all-time great assist players.

There are some facts that do uphold the idea that Muggsy could dunk the ball.

All evidence leads us to believe that yes, Muggsy could dunk. We would all love it if we had video confirmation of this 5’3” powerhouse dunking the ball, but without that video evidence we will rely on the facts we do have.

Muggsy is a great basketball player who overcame many challenges to become a star player. The fact that Muggsy could play as well as he could is inspirational to all young basketball lovers who measure less than 6’2”.

Muggsy proved that physical stature is not everything required to be an astonishing basketball player. He proved that to truly be good at the game a player must have incentive, heart, and a desire to play. He proved that in order to be a success on the basketball court you have to believe in yourself, and be willing to work hard to overcome your physical challenges.

Did Muggsy Bogues ever dunk?

Muggsy Bogues did dunk, and he had a vertical leap that measured 44.3. Muggsy never performed a dunk during an official NBA game. His dunks were performed during practice games and practice drills. Many people say that he could not or did not dunk at all because of his short height and the fact that he never did this during an actual NBA game.

How much is Muggsy Bogues worth?

Muggsy Gogues is often referred to as “the short guy” or the vertically challenged basketball player. His salary reflected that Muggsy’s height did not stop him from being a fierce player with gifted talents. Muggsy Bogues is worth roughly 15 million dollars at this time.

Is Muggsy Bogues a Hall of Famer?

Muggsy Bogues is on the ballot to be included in the 2020 Naismith Hall of fame. Tim Duncan is also reportedly on the same ballot. Both players are excellent with Muggsy being a class of ’87 player and Duncan being a class of ’97 player.

Since Muggsy Bogues retired from basketball he has worked in real estate, and in promotional advertising. He was the head coach of the Charlotte Sting, and he worked as the Ambassador for the Charlotte Bobcats, and as the Bobcats radio announcer.

Their main focus is on youth athletics, leadership development, and character building among the youth. They also mentor the children and help the children build team skills, and learn how to respect themselves, and be a team player.