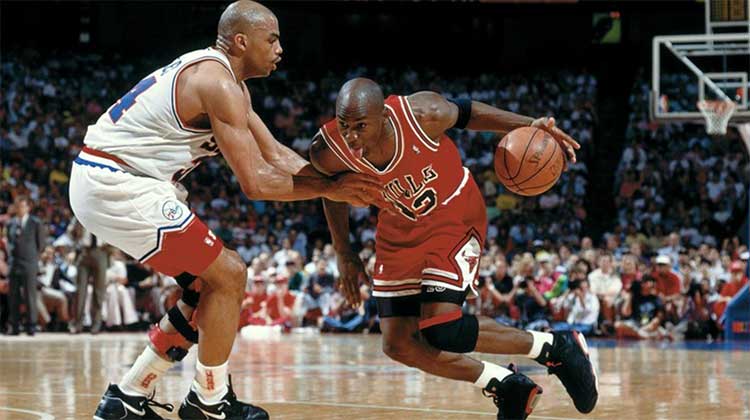 The term triple threat is used in reference to a stance that an offensive player can take during the game. This stance gives the player a lot of options on what to do and which way to go.

The offensive player that is using a triple threat stance will square up opposite a defensive player on the other team. When the offensive player gets into this stance, they have their knees bent and they are crouched and ready to move. The player can hold the ball on either their right or left hip.

They place their feet so that one foot is slightly ahead of the other foot. This foot placement gives them more options on how and where to move to.

When to Establish a Triple Threat

This is a very common play or stance. The offensive player that takes this stance can only do so after they catch a ball from a pass or a rebound. Their court needs to be in front of their position.

Guard wings are recommended to assume this stance automatically when they get the ball into their hands. It gives them a lot of options on what to do next. The triple threat also gives them the opportunity to square off against a defender from the other team.

One of the most Beneficial plays in the Sport

Players worry about being able to dunk, and being able to make a three-point shot. Players should be very concerned with learning everything there is about the triple threat because this play offers the most options and is a valuable tool.

When a player is using a triple threat stance their next move can be to pass the ball to another player, shoot the ball, or dribble the ball. Defenders try very hard to guess what move the triple threat player is going to make so they can stop the progress of the ball.

When the triple threat stance is assumed the player has three options on what to do next. Every player that has just caught a ball is not in a position on the court where the triple stance can be used.

If a post player has their back turned to the basket, they have the opportunity to dribble the ball, and they can pass the ball to another player or turn around and shoot the ball. The action of play in this situation is more linear and not considered to be a triple threat stance.

Who uses this Stance Most?

When a player assumes this stance the player that is opposite of them must try and discern what the ball holder is going to do next. This anticipation can cause the defender to make false starts, or cause them to be slower to react when the ball holding player finally makes a decision and starts to move the ball.

Magic Johnson is considered to be one of the greatest triple threat players in the NBA.

In order to be effective with this play you have to practice the moves and develop the skill. The mechanics of the movements are important and you need to practice making those moves repeatedly so they become second nature for your muscles.

The mental part of the game is something you will have to practice using it against different opponents. Each opponent will offer you an opportunity to increase your ability to create the anticipation and reactions that will happen during a game. This mental preparation is crucial so that you are prepared to make the defender you square up against confused about the moves you intend to make.

When you see this play in action try to guess what the player with the ball is about to do. This will also hone your mental skills.