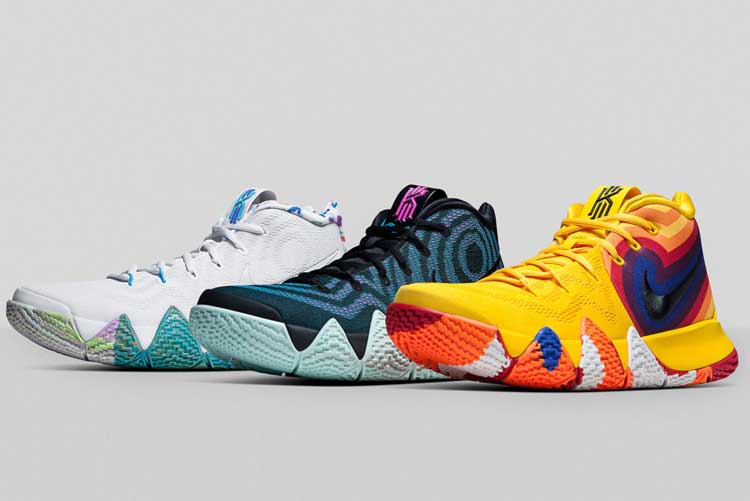 At only 27, Kyrie Irving has played for the Brooklyn Nets and the Cleveland Cavaliers, where he was named rookie of the year. In 2016 he won an NBA Championship with the Cavaliers and took home a gold medal in the Summer Olympics with the U.S National team. Plus he’s starred in the movie Uncle Drew.

But does his shoe the Nike Kyrie 4 stand up as well as his basketball career. 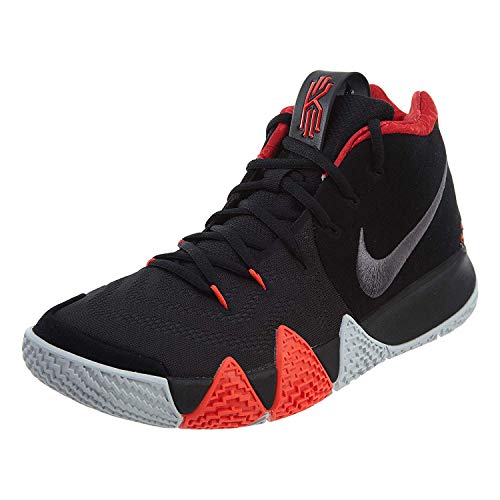 The Kyrie 4 is a versatile shoe with a great selection of five different colorways.

Nike Flywire is a type of thread made from either nylon or Vectran which is a strong fiber ideal for this application. It’s used in the upper part of the Kyrie 4 and offers support for the foot with a light and durable material. The inspiration behind Flywire came from suspension bridges where cables are used to provide further structural support. Flywire technology was first introduced in 2008.

The flex groove traction pattern is a zigzag pattern on the outsole that allows for sharp moves and turns on the basketball court. It grips the ground well and allows for maximum stopping power.

The cushion, which was left out of some models, is used again to great effect in the Kyrie 4. Not only does it take up the entirety of the midsole but it absorbs energy.

Many of those who’ve purchased the Kyrie 4 have commented on the simple, yet stylish design of the shoes. They appreciate it’s distinct look from the other shoes in the Kyrie range.

But some have been disappointed by the lack of colors on offer. But while there are only a few standard colors, exclusive patterns have been made including the Chinese New Year, a confetti colorway, a BHM colorway, and a black and white tie-dye pattern.

Users have been impressed by the traction on these shoes commenting on its ability to allow for extreme turns and sharp direction changes. And the actual design of the traction pattern which is a zigzag. They’ve commented on the ankle support which helps prevent strains and could help minimize injuries when maneuvering quickly.

Along with its superior traction, customers are happy with the lightweight and durable shoes which offer less creasing when making sharp turns. The mesh fabric offers a breathable material that is cool on the feet. The cushioning is also touted as being extremely comfortable and gives the wearer better control.

Hurts to Break In

Some customers have stated these shoes do take a little while to break in, which has been a consistent critique even with other versions of the Nike Kyrie. A couple of customers have also remarked it hurts a little more than other shoes when trying to break them in.

This would follow then as a few customers have said the shoes run smaller than other brands. For this reason, its recommended you try a ½ size larger if you’re looking for a one-to-one fit.

What We Don’t Most

There is a reason why the Nike Kyrie brand has been around for a while. The brand offers reliable, durable and breathable shoes with a flair for the design in their aesthetic. And is created by one of the modern greats in the sport – Kyrie Irving. When the Kyrie 4 was released, there was a significant amount of hype surrounding it and for good reason. It boasts many things that the previous versions have, plus a couple more things to make it unique.

Breathability, durability, and traction are its true highlights, being more than average in each of these categories. The mesh materials allow it to strengthen your game while not falling victim to some things that would ruin a shoe fast, such as creasing. It offers excellent traction that really sticks you to the ground and its durabile design means you’ll get a good amount of wear from these shoes. Once these beauties are broken in you’ll be flying around the court with minimal bench time to rest your feet.

With a sleek, contemporary design these shoes offer a limited color palette but what is offered, is unique and stylish. It might take you a little time to break them in but once you do, these shoes are bound to elevate your game. This combined with the legend that is Nike, and you’ve got a legendary shoe.